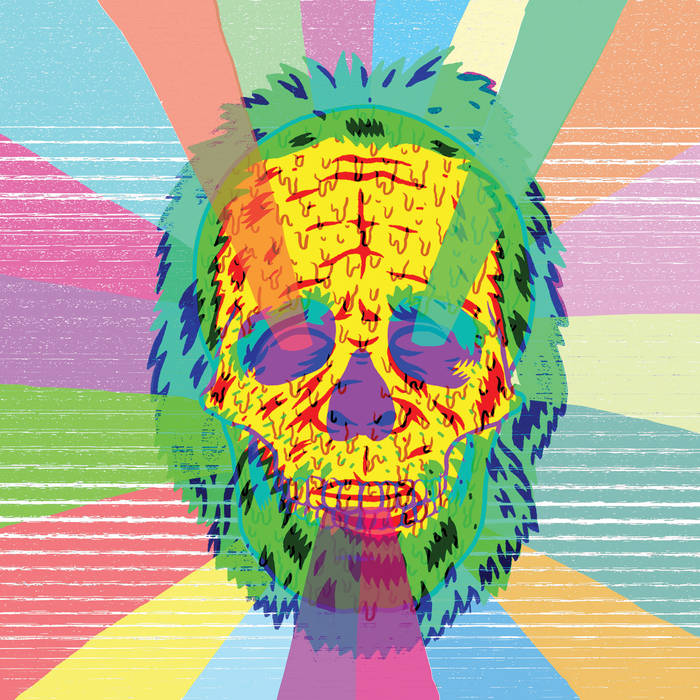 MINOTAURS’ wild and wonderful Weird Waves, an album described by its architect as an “apocalyptic-psychedelic afro-folk epic” —probably the only one you’re likely to hear in 2015. When main Minotaur Nathan Lawr first transitioned from folkie singer/songwriter to rhythmic bandleader on 2010’s The Thing, it was, in some ways, an extension of his work with innovative dub/punk/electronic band King Cobb Steelie in the late ’90s, with whom he toured when he was just out of high school. Here, however, Lawr dives off the deep end and surfaces with the most accomplished, experimental, and rewarding album of his career.

The 1970s afro-rock influence that was initially MINOTAURS’ raison d’etre is still strong, but Lawr was also listening to a lot of psychedelic soul legend Curtis Mayfield, German mind-expanders Neu, and the sonic fuckery of Sun Araw (not to be confused with interstellar electronic jazz pioneer Sun Ra, though he’s undoubtedly in the mix somewhere as well). Weird Waves was constructed from studio jams with his killer live band, and then tinkered with at home, where Lawr added keyboard, drones and random sounds. “That way, I can just follow my instincts and not explain anything to anybody. It can be slightly peculiar: things entering and leaving at odd times. That’s really interesting to me as a listener. There’s a lot more room, it’s more relaxed.” What could have been an insular, claustrophobic record is far from it: the energy of the live MINOTAURS is solidly at the core, while Lawr’s inescapable melodic gifts are still in full force—even if they’re just one texture among many heard here.

Nathan Lawr grew up outside Guelph, Ontario, where he still lives now. He was a pivotal player in the explosion of Canadian music in the early 2000s, being a key member of Royal City and having played with the Constantines, Jim Guthrie, Fembots and King Cobb Steelie. He was last heard on Bry Webb and the Providers’ 2014 release, Live At Massey Hall. Weird Waves is his seventh album, and third as Minotaurs. Lawr’s status as a musical MVP easily draws others into his vision: Minotaurs is, by design, a big band that has included, at various points, guest vocalists Sarah Harmer, Tamara Lindeman (Weather Station) and Ruth Minnikin; drummer Don Kerr (Rheostatics, Ron Sexsmith); bassist Kevin Lynn (King Cobb Steelie); Paul Aucoin (Hylozoists); saxophonist Jeremy Strachan (Feuermusik) and trombonist Steve Ward (Caribou).

Off-stage, Lawr created the Canadian Artists for Civil Liberties, and his political concerns bleed into his work—not through sloganeering, but through thoughtful self-examination: “Am I just the oil in a cheap machine?” he sings. Of course, music and dance are therapeutic antidotes to an existential crisis. MINOTAURS want you to surf these Weird Waves to a place of peace, a calm amidst all storms, an island of sanity in a world that needs some—badly.

Produced and Edited by Nathan Lawr

Mixed by Jeff McMurrich with Nathan at 6 Nassau

Artwork and layout by Gregory Pepper

Minotaurs are a nine-piece band blending the churning funk rhythms of Fela-Kuti-style Afrobeat and the deliberate songcraft of indie rock. The dynamic rhythm section is complemented by massive billows from the horn section; it’s a dance party, but a smart one where Lawr’s thoughtful, impassioned lyrics don’t take a back seat to the funk. ... more

Bandcamp Daily  your guide to the world of Bandcamp

New sounds from Mavi, Ivy Sole & Moderator, plus AJ, the One joins the show, for her latest release